A Road Trip with Susan

Larry loves to sail.  I do not boat.  When he proposed marriage to me, I told him two things:  1. If you run for political office, you should know that my time at the University of Virginia did not feature temperance and bible study, and 2. I do not boat.

Luckily, he has found people who love to boat.  He recently went to Croatia to boat, leaving me at home with Susan and Amy.  Amy had to be dropped in Santa Cruz for camp counselor training for a few days, so Susan and I decided to drop the dog at Sweet Doggies (I am not making that up) and take a road trip down the coast.

Traveling with one daughter is even better than traveling alone.  Two people, one of whom gave birth to the other, creates a great dynamic.  Susan and I have known each other for her whole life, so we have a good idea of each other’s likes and dislikes, and we are interested in making each other happy.  Also, we both have to pee a lot, so there is no eye-rolling about frequent bathroom stops. 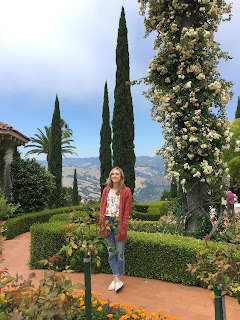 Here’s a fun fact: The last time I was at Hearst Castle, I was pregnant with Susan.  Susan and I spent a day there on our trip, and a surprising number of people asked if we had been there before, and I was able to say, “Yes, and the last time I was here, she was inside me!”

We did the downstairs tour, which we enjoyed.  Since it was just the two of us, and we are inveterate plaque readers, we then spent another two hours exploring every inch of the gardens.  Then we went on the upstairs tour, because, Why Not?  By the time we left, ours was the only car left in the lot. 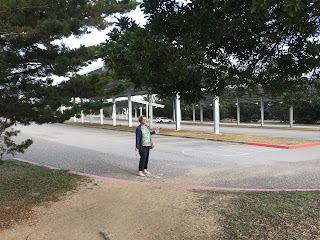 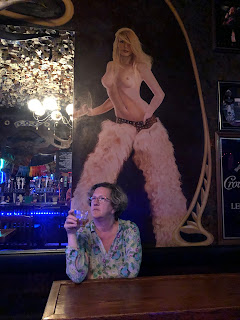 Tavern, which has been serving up watered-down liquor since 1906.  There were only six patrons in the bar, and no one else seemed interested in the juke box, so were able to play pool while listening to all our favorite songs.

The next day we planned to go wine-tasting, but we lingered over brunch so long that we only went to one winery.  After we finished our cheese plate on the winery patio, Susan scrapped some abandoned cheese off a neighboring table.  I was so proud. 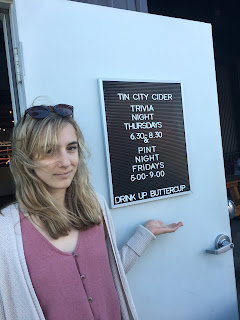 I had noticed a nearby Cidery that was open late, so we took ourselves off to “Tin City” near Paso Robles.  Tin City is an enclave that looks like re-purposed old warehouses, the sort of thing that hipsters love, but here’s the thing: it’s all new construction, built to LOOK like old warehouses.

It had a very “If you build it, they will come” aura.  Susan pointed out all the hipster catnip for me.  Food trucks, live mandolin music, giant Connect-4 and Cornhole games, dogs in bandanas, tattooed bartenders, craft beer and cider.  It was surreal, but the cider was good.

On our final night, we stayed at Asilomar in Monterey, a resort designed by 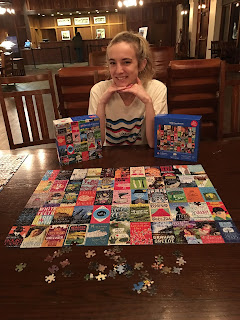 After a walk on the beach, Susan and I went to the common room and discovered, on a table, an unassembled 1000-piece jigsaw puzzle of book covers.  Umm, you know we stayed up until 1:30 am and finished it.

I am on very many arts events email lists.  Every day I get announcements about professional and community theater performances, art museum exhibition openings, concerts, monster truck rallies (we actually went to that, but you can imagine exactly what it was like, so I feel no need to describe it further) etc. etc.

Once in a while an especially odd event catches my eye and I feel compelled to attend.  For instance, an outer-space themed Bollywood dance school recital in Sunnyvale, complete with a laser light show.  The “Miss Chinatown USA” beauty pageant held in the San Francisco Palace of Fine Arts, which was mostly conducted in Mandarin and featured some truly questionable “talents”.  An extremely gay performance of “Noises Off” in a tiny basement in San Francisco that featured a lot of gold lamé and boas.

On our visit to Ellen during her semester abroad in Denmark, we attended a Danish language rock musical revival that was advertised all over Copenhagen.  Many, many people in the audience knew all the words and sang along to all the songs.  We actually look pretty Danish, so the people around us were probably wondering why we were not also singing along.

Recently Susan and Amy accompanied me to San Jose to see the traveling company of the Phillipine Ballet Theater perform “Filipino Masterpieces” and “Serye at Sayaw”, a “special concert featuring a unique cultivation of music and dance inspired by Philippine-American culture, history, and heritage.”
It was so much odder than I had anticipated.  I coerced my daughters into going with me, but they were hooked after the first number.  I’ve lost the program, but here were some highlights:
-       Local politicians awkwardly talking about how much they love Filipino culture
-       Selections from the musical “Frozen”, performed by a rotating cast of local Filipino girls belting along karaoke-style to a very loud recording
-       A man of a certain age who sang a Filipino-language pop hit he recorded many years ago.  We think the song was originally a duet, and since he didn’t have a woman singing with him, he held the microphone out to the audience and let all the older ladies sing those parts.  And THEY DID.  He then told us that although he was “the worst sinner in the world” (and we’re like, what did he do???), he welcomed Jesus to his heart and now he’s saved.  And then he sang some dubious Christian songs in English.
-       A ballet number in which the dancers repeatedly pulled enormous banners across the stage and wrapped themselves up in them
-       A vaguely militaristic dance performed to the Filipino equivalent of a John Phllip Sousa march
-       A modern dance choreographed to the Pink song “Just Give Me a Reason”, performed by a man and woman who were dressed as if on the way to the gym (Our favorite performance of the evening)
-       And to close, “Serye at Sayaw”, a story in dance of boy-meets-girl, boy-gets-girl, girl-leaves-first-boy-for-second-boy, second-boy-misbehaves-and-girl-slaps-him, first-boy-gets-girl-back, and various other permutations of pas-de-deux.  This was an audience favorite, and people were cheering, gasping, clapping, and sort of “no-he-didn’t”-ing through the whole dance.  I have never been to a ballet with so much audience participation.
Mabuhay, Phillipine Ballet Theater, that was a great show.

Posted by Katherine Lang at 9:49 PM No comments: