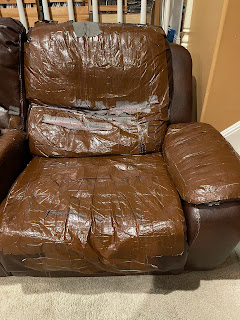 Lately, when I plop down on our crappy old sectional sofa (known to our circle of intimates as "the comfort turd"), the phrase "things fall apart, the centre cannot hold" rattles around in my overstuffed head.  Upon googling the phrase I learned (presumably re-learned) that it is a line from the poem "The Second Coming" by W.B. Yeats.  The phrase was written about the bleak political landscape of post WWI Europe, but I feel it also accurately describes the state of the comfort turd.
My family has been on me for quite some time to acquire alternative seating to the comfort turd, which is now so full of duct tape that it leaves sticky residue on one's clothing.  One day last week, after meeting a friend in Mountain View for an invigorating neighborhood walk, I finally decided to investigate my options.
I felt I would lose momentum if I went home and showered first, so off I went in my capri pants, stretched-out t-shirt, sweaty headband, and arch-supporting athletic shoes.  I decided to first try the Home Consignment Center, which is where we found the comfort turd many years ago, to see if lightning might strike twice.
The Home Consignment Center is in Campbell, across the street from a diner called The Hash House, where I had an excellent plate of chilaquiles to fortify my search.  Then I sauntered into the Consignment Center, where an excited older gentleman, who probably is an employee, accosted me and showed me a metal patio table with attached stools that fold up under the table.
I allowed him to demonstrate the wonder of the table to me a few times and then scooted off when his attention was diverted.  As I made my way around the store, I saw him repeat the performance with every new person who walked through the door.  It's like, he wants to sell the table, but if he does, what will he do to occupy himself?
Sadly, there were no adequate sectional sofas in the Home Consignment Center, and also no public restroom.  I had to go next door to a Safeway, so as long as I was there I bought some beer. 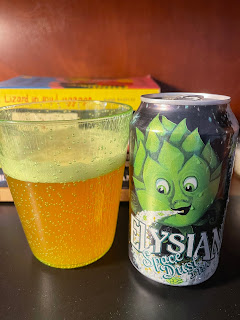 Is Elysian Space Dust the best IPA I've ever had?  Who knows, but isn't the can cool?  I love the alien hophead blowing glittery dust.

My next stop was La-Z-Boy Furniture Galleries.  Once I saw the floor models, I pretty much knew that a La-Z-Boy sectional with electronic recliners and cup holders was my destiny, but I decided that I had to do a little due diligence and check out some other furniture stores.

Next stop was Direct Factory Furniture, or maybe Factory Direct Furniture?  It is a small store down the street from La-Z-Boy run by a friendly Asian man with a great business plan.  He carries two models of everything: two sectional sofas, two reclining armchairs, two dining sets, two bedroom suites; and he knows EVERYTHING about those models.  He doesn't have to refer to a catalog or a computer, he just knows.

So after I sat on one of the sectional sofas, he came over and told me my upholstery options: fabric, leather, or fox leather.  He prattled on but I wasn't really listening after the words "fox leather".  Then I realized that he meant "faux leather", and I wondered how many years he had been saying it wrong, and who was going to be the person who finally told him.  Not me!  La-Z-Boy was still winning.

Years ago we bought a very nice dining set from Ethan Allen, so I headed to their showroom.  I stepped through the doors onto the plush oatmeal-colored carpet and found myself in the sort of extremely tasteful demonstration living room that has large beaten brass bowls full of woven wooden balls.  As a beautiful dark-haired lady in palazzo pants wafted toward me on a cloud of subtly perfumed air, I became intensely aware of my grubby appearance.

"May I help you?" she purred.  "Uh," I stammered, "Do you have any reclining sectional sofas with cup holders?"  She paused a beat and said, very nicely, "Sweetheart, there is nothing for you here."  I beat a hasty retreat and got my confidence back by going into the Goodwill next door and buying a Jesus statue. 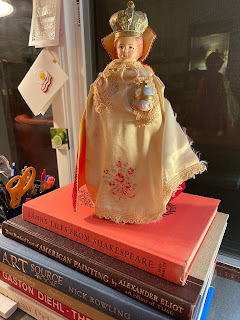 Equilibrium restored, I headed to my final stop, Rose Design Fine Furniture, a shop which only sells custom-order sofas.  I was the only customer, so the proprietor, a talkative man of Eastern European extraction, had plenty of time to explain to me that none of his sectional sofas reclined, and furthermore, that I did not want or need to recline, because reclining was bad for my back.
"I still want it though," I said, channeling Dwayne The Rock Johnson from the very funny SNL sketch "Enhancement Drug". 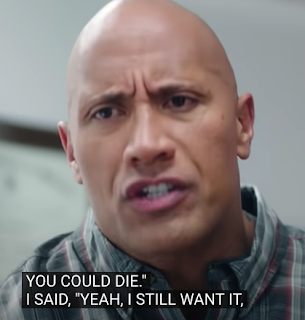 All in all it was a very productive day, and it felt like a normal pre-pandemic day, except that we all had masks on.  A few days later Larry and I went to the La-Z-Boy and ordered ourselves a reclining sectional with cup holders.  And this time we paid extra for real cow leather, so we won't end up trying to duct tape the fox leather back together.  Also, the sofa model we selected is the Aspen, which Larry dubbed the Ass-Pen, so we have the nickname sorted already.
It will be a bittersweet goodbye when the Junk King comes for the comfort turd, but I'll have lots of time to get used to the idea, as it will be six months or so before the La-Z-Boy arrives.  In the meantime, I'll just have to make do with this Lazy Boy. 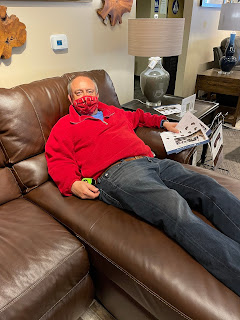 Posted by Katherine Lang at 1:34 AM No comments: