It has been hot in the Bay Area this week.  It's usually much cooler in San Francisco than in Los Altos, so when the notice of Ellen's failure to get her car smog checked arrived in the mail, with the warning of imminent impoundment, I thought, what the heck, I'll go up there and sort it out.  How long could it take?  Ha ha ha.

I drove up Tuesday morning full of purpose.  In addition to the car issue, Ellen was also dealing with fleas in her apartment.  The cat had been flea treated and Ellen had vacuumed the floors, but she wanted to wash all the bedding.  I agreed to run all the bedding through the laundromat downstairs before smog checking the car, since Ellen had to work every day this week.

The laundromat was lovely, I must say.  My kids and I loved the book A Pocket for Corduroy, which takes place in a laundromat.  A laundromat is a great liminal space, where everyone is waiting for clean clothes to emerge from the dryers, and there isn't anything else you need to do.  You can watch a telenovela on the TV, read a book, scroll through your phone, eat a candy bar, watch people on the street (I did all those things).

While all the sheets and blankets and towels were in the dryers, I set out to Walgreens to purchase tall kitchen garbage bags in which to put the clean items.  It was such a hot day in San Francisco that there were 15 people ahead of me in line purchasing cold drinks.  (In addition to my garbage bags, I also purchased a cold Cucumber Lime Smartwater, such a refreshing beverage.) 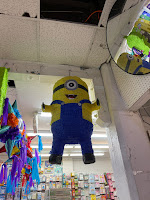 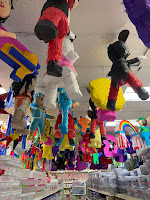 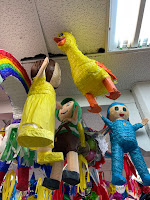 By the time I got back to the laundromat, I had to move my car since all the spots off Mission are two hours maximum.  I bagged up all the clean items and hauled them in three trips up four steep flights of stairs to Ellen's apartment, after first attempting to use her keys to enter the preschool next door to her place, which resulted in much confusion for all involved.

I was meeting Ellen on her late afternoon work break, and then meeting Larry for a Giants baseball game, so I had to give up on my dream of smog checking the car.  I had noticed a tiny Peruvian restaurant on Mission so I went there for a meal before meeting Ellen.

I had a delicious plate of Aji de Gallina and was feeling pleased with myself for finding such an authentic cafe.  A little too authentic, as it turned out.   I am not strong enough for authentic Peruvian food.  Ooof.

Ellen showed me around the clothing store where she works and then we sat on some risers outside a bakery on Valencia Street.  As we were talking, mice began to emerge from the structure and I shrieked a little.  Ellen was not fazed and pointed out that in New York, it would be rats.  This was both true (the last time I was in Brooklyn a rat ran over my foot) and strangely comforting.

Larry and I enjoyed the Giants game very much.  It was great to be at the ball park.  I spent one inning in the ladies room thinking about Peru, but I was back in my seat for the eighth inning, in which Mike Yastrzemski hit a grand slam to win the game.  Very cool.

Wednesday I headed back up to San Francisco, determined to get Ellen's car off the impound list.  I parked near Ellen's work and picked up her keys.  I walked over to the closest service station to see if they could accommodate me, but I needed a STAR smog station, which they were not.  The guy there said to try the Shell at 16th and Guerrero.

I called the Shell, but no one picked up.  I was very reluctant to hike up Bernal Hill to get Ellen's car only to be turned away, so I walked a mile over to the Shell and was told I could bring in the car.  By now, my two hours of parking were up, so I hiked back to my car to drive to Ellen's car.

Here's where the day got even more inefficient.  Ellen had told me her car was parked on Bonview by the park, so I entered "Bonview Street" into Google maps and drove over and parked my road boat at the bottom of the street.  I hiked all the way up Bonview but did not find her car.  I couldn't call her at work because she's not allowed to have her phone.  I looked at the map again and discovered that Bonview is *bifurcated* by the f(#@ing MOUNTAIN that is Bernal Heights Park. 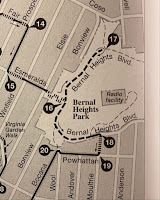 Okay, it may not look that significant on the map, but it is a monster hill.  I am nothing if not stubborn, so instead of re-parking my car, I hiked over.  I found Ellen's car, unlocked the door, slid in, and tried to remember where the start button is.  It was terrifically hot in the car, so I pulled the inside door handle to let in some air.  Nothing happened.  The door handle was broken.

Reader, I panicked.  For a few seconds I thought I might die of heat prostration in that car.  I yeeted myself over the console, flung open the passenger door, and stood panting on the street.  A concerned hipster hill hiker came over to check on me and pointed out that I could put down the driver's side window and open the door using the outside handle.  Okay, okay, okay.  I'm old enough to be allowed to be panicked and nonsensical.

I got the car to the Shell and had a pleasant hour in a tapas bar while it was being checked.  I was a little wary of ethnic food after the digestive upset of the previous day, so I ordered ham toast, which seemed safe.  I was still pretty sweaty and freaked out, but the albariño helped.

I returned Ellen's car to its previous parking spot and hiked back over the mountain.

After retrieving my car and returning Ellen's keys to her I was finally finished with my quest.  It took me 4.5 miles of walking and seven hours of time to get her car smog checked.  An incredibly inefficient couple of days, but an adventure of sorts.  I mean, I'm not sorry I did it, I guess.  I have had to retrieve Ellen's car from an impound lot once already (a good LA story) so hopefully I have forestalled that this time.  My phone says I climbed thirty flights of stairs, so that's something.

Posted by Katherine Lang at 2:09 AM No comments: