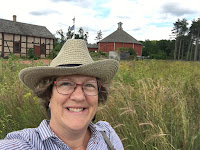 I make it a policy of having very low expectations about things such as theatrical performances, birthday parties, family beach weeks, and tourist attractions.  That way, if the thing is bad, I’m not too disappointed, and if it’s good, I’m pleasantly surprised.

Old World Wisconsin pleasantly surprised me.  The whole endeavor is so fundamentally crazy, it’s difficult to see how it ever came to be, but it did, and it’s marvelous.

I can’t think how the Wisconsin Historical Society pulled it off, but over the past 43 years they have created a transcendently odd, simply enormous 480-acre open-air museum by transporting over 60 historical structures from every corner of the state and reconstructing them in the Kettle Moraine forest. 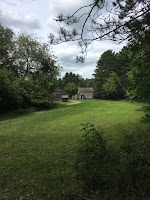 “Piece by piece, workers painstakingly dismantled the old structures by numbering bricks, boards and logs, and moving them to the site of Old World Wisconsin. In a setting largely unchanged from the rolling prairies the first pioneers found, the buildings took shape once more, reconstructed precisely as they had once been built.”

Some of the historical buildings are grouped together into a “village” area. Some just pop up out of the second-growth forest as you meander around.  Which seems like maybe how it would have been when they were homesteads. 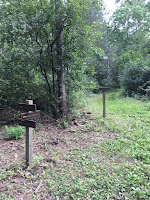 There is a tram thingy that winds through the dirt roads of the park every twenty minutes, or you can just take your chances on the footpaths, as I did.  I just checked the Health App on my phone and I walked 9 miles today, most of it purposeful, some of it backtracking because I have no sense of direction at all.

Many of the 60 structures were staffed by costumed “interpreters”.  These ranged from super-enthusiastic history nerds to supremely indifferent high-school summer hires. 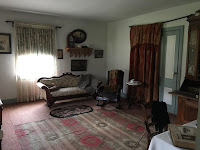 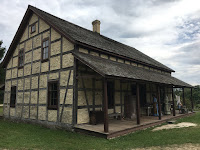 I had a really strange moment today when I walked into the 1880 Koepsell farmhouse, built by immigrants from the Pomeranian region of Germany – it smelled exactly like my German grandmother’s house in Texas.  (Twilight Zone music)

Over the past few months, I have become fixated on Wisconsin history, and I have finally found a place where no one finds my interest odd.  In fact, the gift shop lady recommended several Wisconsin histories which I happily purchased. Old World Wisconsin, you know I will return.