Rats All The Way Down 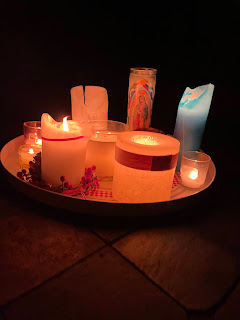 The virus times have been awful for everyone.  I've frankly always hated all those feel-better mantras such as "Whenever God closes a door, he opens a window".  I mean, what the hell, why not just leave the door open.  So I'm not in any way saying there is an upside to the virus times, because there isn't, but, since we can't do anything else, we've been spending a lot of time on the back patio, and we've learned to appreciate just hanging outside.  It's nice to see all the stars.

The virus times have allowed me to do the sort of entertaining that I love - extremely half-ass entertaining.  I can invite people over and not do *anything* but ensure the patio chair cushions are dry.  Sometimes I will also shake you a martini, or bring out my tray of jank candles, or give you an electric blanket, or light the fire table.  But mostly we just sit on my patio chairs and talk.

It's winter now, so a lot of patio time happens when it's dark outside.  Behind our back patio is a lower field, and then Adobe Creek, which is usually free of water, but full of wildlife.  During the day there are lots of animals to see, such as deer, jackrabbits, little bunnies, crows, and squirrels.  During the night there are lots of animals to hear, such as rats, rats, rats, opossums, raccoons, and coyotes.

In the bay area we have many, many Norway Rats.  They can be up to 8 inches long and make nests in trees, in creek beds, under the hood of your car, in your potting shed, in crawl spaces under your house, basically anywhere.  At night, when we sit outside, we can hear the rats foraging for food.  And we tell ourselves that maybe the noises are emanating from some marginally cuter animals, such as opossums or raccoons, but deep down inside, we know it's rats.  It's always rats.  It's rats all the way down.

Lately the nighttime rat noises have been interspersed with the yipping of coyotes.  Coyotes actually yip.  It's kind of cool to be sitting outside and hear the coyotes yipping, and then to hear all the outside dogs in the neighborhood losing their collective minds and howling back.  It's like a free concert!

We have an intercom system built into the house that enables us to play music inside and outside, so sometimes we do that.  I try to remember to turn off the outside speakers when we come back in, but sometimes I forget.  One time I forgot for weeks, which led to this interesting situation.

Our property adjoins the back fences of several houses on Middlebury Lane.  The residents of Middlebury Lane have been kind enough to include us in their gatherings, and over the years we have gotten to know them fairly well.

One year as we were drinking and socializing at one of these events, my neighbor Tim came up to me and said, very politely, all things considered, "Do you think maybe you could stop playing music at 7 am in your back yard?"

And I had one of those moments they show in films where a series of events replays rapidly in your mind.  Weeks before we had used the outside speakers, I never turned them off, and in an effort to get the kids out of bed for school, every morning at 7 am I had been blasting the Fountains of Wayne song "Bright Future in Sales" which features the lyric "I've got to get my shit together, cause I can't live like this forever..."

So, yeah, I was pretty embarrassed.  Ever since then I sort of obsessively check to make sure we aren't blasting the neighbors with my current musical obsession.  Lately I'm really into my curated Pandora station, Cake Radio, featuring, you guessed it, the songs of Cake.  Also a lot of Bowling for Soup, They Might Be Giants, Barenaked Ladies, All-American Rejects, Sugar Ray, etc.

I love that dumb plaque people put in their kitchens that says "I Love To Cook With Wine, Sometimes I Even Put It In The Food".  It's funny because it's true.  I find that cooking with wine goes really well with blasting Cake Radio.

I've wandered away from my theme of patio entertaining, but you can blame it on the entire bottle of Liquid Light Sauvignon Blanc I drank on my back patio earlier tonight.  I know I drank the whole bottle because everyone else was drinking red wine and the Liquid Light bottle is empty...

Posted by Katherine Lang at 1:00 AM