Vaxxed and Ready to Go Places 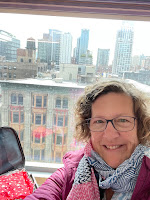 Well!  It has been a whirlwind of a month for me!  I'm fully vaxxed and back in action!  Exactly two weeks after my second vaccination I boarded a plane for Chicago.  Upon landing, I had originally intended to take the Van Galder bus to Madison, Wisconsin to help Amy move her stuff into storage for the summer (and drink delicious beer and mess around by the lake) but there were no hotel rooms available in Madison because of graduation, so I had two glorious nights alone in a Chicago Aloft hotel.

After checking in to my hotel, I walked around the corner to a Lou Malnati's and ate a medically inadvisable amount of deep-dish pizza and drank two large beers.  I stumbled back to my hotel, where I thought I would recline on my bed and read for a few minutes.  Twelve hours later, I woke up.

I had booked a ticket for the Art Institute of Chicago and was eager to embark on my Big Day at the Art Museum, but first I had to eat something as cafes in museums are still closed.  My Lyft driver from the airport had pointed out the enormous McDonald's down the block from my hotel and told me it used to be the Rock 'N Roll McDonald's.  A couple of years ago, it was completely remodeled and is now a "Green" McDonald's with plant walls and a rooftop garden.  The sausage McMuffin was delicious, as always, but I'm sorry I missed seeing the kitschy old rock 'n roll memorabilia.

I had a fabulous day at the Art Institute.  I will share a family joke and see if you also find it amusing.  There is a New Testament story about how Salome danced for Herod and he enjoyed it so much he promised her whatever she wanted, and she asked for the head of John the Baptist on a plate.  This touching scene is depicted in a lot of paintings, and whenever we find one in a museum, one of us will say, in a world-weary voice, "Not head for dinner AGAIN" 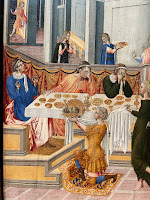 When I got too hungry to look at any more art, I went across the street to the Chicago Athletic Association, a former men's athletic club that is now a fancy hotel with a lobby bar and restaurant with lots of fireplaces and leather sofas.  I had a couple of Manhattans and a hamburger by a fireplace topped with a frieze panel of homoerotic wrestling, or some activity involving a lot of naked men.  It felt awesome to be indulging in something that was denied to women for so long (having drinks and a hamburger on my own, I mean, not the naked wrestling). 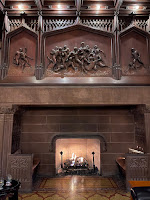 The next morning I made my way to the downtown Chicago train station and took the Van Galder to Madison.  I stayed in the hotel that was the closest to Amy's apartment, the Canterbury Inn.  It is a six room boutique hotel above a bookstore, and each room is painted with scenes from a different Canterbury tale and is crammed full of bookshelves, club chairs, low-wattage lamps, and red brocade drapes.

I think this could actually serve as a litmus test of how well we would get along.  Does this sound intriguing to you, or just weird?  Amy and I enjoyed the Knight's Room very much. 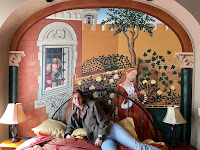 After a few days of wrapping up Amy's affairs and treating her friends to meals, we got back on the bus to the downtown Chicago train station.  Amy and I were on our way to visit my parents in Springfield, Virginia and my friend Colleen suggested that we take the overnight train.  We had a tiny roomette on The Cardinal, the Chicago-New York Amtrak train.  The Cardinal leaves Chicago at 6 pm and stops in Alexandria, Virginia 24 hours later.
It was great!  We were shown to our roomette by our car attendant, Joyce, who was remarkably unenthusiastic about, well, everything.  Amy and I, on the other hand, were SO excited to be on the train.  If you've never been in a roomette, it's a tiny compartment about the size of a large dining table and contains two facing upholstered chairs that turn into a bed, a fold-down table, a top bunk that drops down, and a toilet and sink between the chairs and the compartment door.  Here's a picture: the pink lid next to the blue chair lifts up to reveal the toilet, and above it is a metal sink that drops down from the wall. 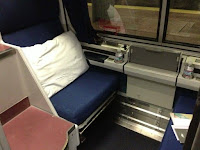 Okay, so at first I was like "We are not going to use this roomette toilet, we will just go down the hall to the restroom in the coach car."  The first time that we did that, however, we encountered the train's resident drunks: a thin man in his seventies and a fat man in his thirties who had seated themselves right next to the restroom and were harassing every woman who came near them.

I had my suitcase whiskey with me, and after a few tots of that the roomette bathroom did not phase me any more.  It was actually quite handy to slide one seat over, do my business, and slide back.  Amy and I stayed up way too late playing gin rummy and listening to bluegrass music on her portable speaker. 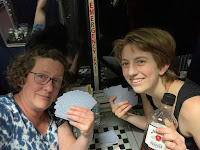 We finally put the cards away, folded up the table, turned the chairs into my bed, and cranked Amy's top bunk down from the ceiling.  It was very novel to fall asleep to the rocking of the train.  We woke up in West Virginia, which was very green and beautiful.  Joyce brought me a Jimmy Dean sausage sandwich and a coffee, which I enjoyed in my pajamas on my bunk while watching bald eagles catching fish in the New River. 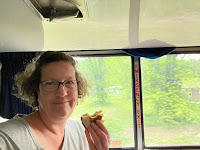 After we got off the train in Alexandria, Amy wanted to enjoy being outdoors for a little while before we got a Lyft to my parents' house, so we hid behind a war memorial and drank beer out of paper bags and soaked up some sun.

It was great to see my parents again.  My Mom had a list of tasks for me and Amy.  Mom is devoted to her garden, and there was weeding and mulching and planting to do.  Unlike me, my Mom has amazing will power and self-control, and when she told me she hadn't eaten pizza in years, I knew what I had to do. 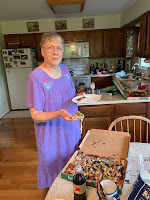 My Dad can't leave the house and my Mom won't leave him alone except to go to the grocery store, so Amy hung out with Dad while Mom and I went to all her favorite stores.  Mom had a lot of pent-up shopping to do.  We spent hours in Marshalls and Tuesday Morning and Bed, Bath, and Beyond.

Doug and Amy and I took a walk around Mercer Lake.  It was such a beautiful day.  Look at these two cuties: 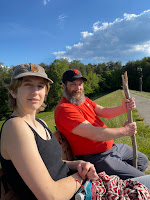 My Dad has been spending a lot of his time watching The Great Courses on his Roku TV.  He may be the only person who has ever truly gotten their money's worth from The Great Courses.  If you ever want to know something about the historical accuracy of the New Testament, famous explorers, ancient Egypt, country music, the Vietnam War, or Hitler, he'd be happy to enlighten you.
Mom has a disturbing habit of mailing the girls cash in envelopes.  None of the girls have very reliable mail service, so we devoted a day to setting Mom up with Venmo to satisfy her generous urges.  Amy did her valiant best to explain Venmo to me and Mom, and although I'm not sure either of us really understands it, we finally got it set up.
We are back in California now, but I am raring to go on another adventure!!

Posted by Katherine Lang at 2:04 AM