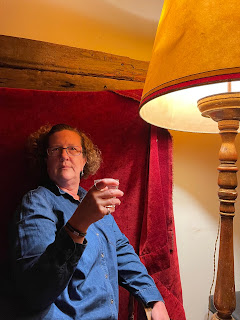 A few weeks ago Ellen's boyfriend Jeff, who is a drummer for the band Flora Flora, invited me and Larry to attend his album release party in the basement of a bar in San Francisco.  I said, "Will we be the oldest people there?" and Jeff said "Probably, but you should come anyway."  So we did!

That whole weekend was pretty fun.  On Thursday, my neighbor Camay and I drove up to the Legion of Honor and saw the Pompeii exhibit.  We decided to get the audio tours.  The young woman whose job it was to explain how to download the tour to our phones was extremely patient, but I could almost see the thought bubble above her head saying "I got a fine arts degree for this???"

The Legion of Honor Café is finally open again, so that was very exciting.

On Friday I paid a visit to Meyer Appliance to check in with James, the salesman who sold me a GE refrigerator in March.  I know there are lots of supply chain issues, but Larry advised me to go in person and advocate for our refrigerator.  Every few weeks I stop in to get a different story from James about when my refrigerator might arrive.  He looks concerned (or as concerned as you can look with a mask on), prints some papers, purposefully strides off to the back office, and then comes back and tells me lies.

I don't mind visiting James at Meyer Appliance, though, because it's right next door to the Goodwill.  This time I got a great pair of Jaclyn Smith for K-Mart chartreuse jeans. 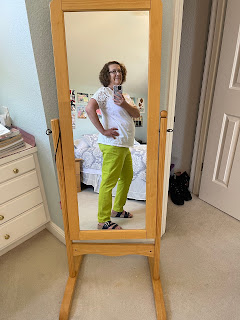 For our big excursion Saturday night, I booked us a room at a Victorian B&B in the Mission, since Flora Flora was the headlining act and didn't start until 11 pm.  Can you imagine anything happening in Los Altos at 11 pm?  My mind reels at the very idea.
We drove up to San Francisco, parked our car, and found our excellent B&B, The Inn San Francisco.  They take the whole Victorian thing quite literally, and the place is full of potted palms, antimacassars, velvet drapes, tasseled lamps, and little wood tables. 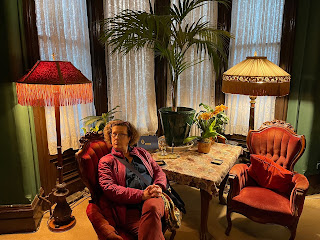 We had some great Peruvian food (It took some nerve to try Peruvian again after my last experience, but it worked out fine this time).  Several cocktails were consumed, and then we headed to Amado's.  It was a lot like a speakeasy - you had to show your ticket to a lady in the bar and then she opened a funky wooden door and gestured down to the basement.
Mint Julep played at 10 pm, and they were quite good.  And then - Flora Flora!  We enjoyed the music very much, and had a few more cocktails while we listened. 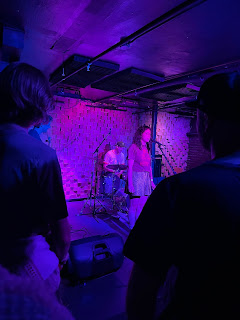 So that by the time we headed back up to the bar, I was drunkenly enamored by the upstairs wrap-around balcony above the bar and insisted that we all take photos under the comically large lamps.  My family indulged me, so here are some nice photos for you to enjoy. 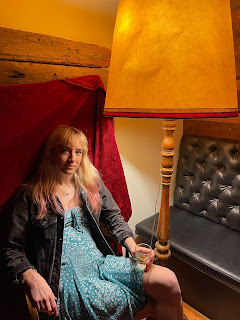 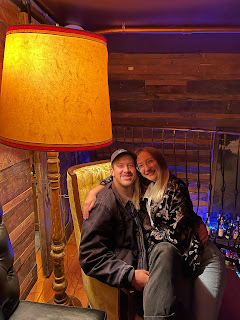 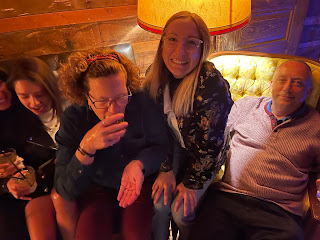 Susan walked us back to the Inn because I had a package that had arrived in Los Altos for her.  Here is a bonus photo of Susan modeling her Teletubbies Gay Pride hat. 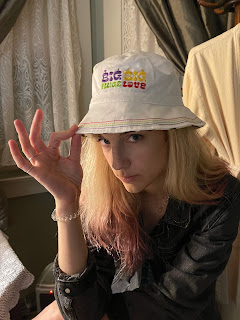 The next day was a little rough, not gonna lie.  It's been quite a while since I downed six(?) bourbons in one night.  Larry was very nice about it.  He drove home and even stopped at Five Guys for hamburgers to take the edge off.  There was some napping in the afternoon, and then we had a lovely outdoor dinner with our neighbors.  Derek offered me a bourbon after dinner, and for the first time in the history of our dinners, I had to decline.  Maybe next time.

Posted by Katherine Lang at 8:24 PM