A Road Trip With Amy

Amy will be attending the University of Wisconsin next year, and she had to travel to Madison last week for a mandatory two-day freshman orientation.  She could have gone alone, but there was a set of parent workshops, and I am generally desperate for an excuse to leave my house.

We stayed in a spooky old church in Madison.  It was an AirBnb listing I chose because it was a large space with two beds, and I try not to share a bed with Amy.  Susan and I shared beds on our recent road trip, and that was fine, because Susan is a peaceful and self-contained sleeper.  Amy, on the other hand, thrashes all night long as if wrestling alligators.  Also, she says I snore, which, maybe, but all I can say is I’ve never heard it. 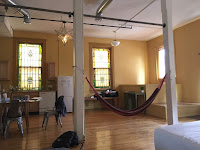 The church had been divided into three floors, and we had the middle floor.  Stained glass windows that were probably high up in the wall of the church started a foot from our floor and there were many strange platforms and locked closets.  Spooky.

Amy had a useful time registering for classes and getting an ID card, while I mostly sat in the back of a roomful of over-invested parents and worked some sudoku puzzles while a steady stream of enthusiastic Wisconsin administrators assured us that our children would be FINE.

We then spent four days driving up the Mississippi river to Minneapolis.  Amy is an ideal companion for road trips because she lets me do whatever I want to do.  Here were some highlights: 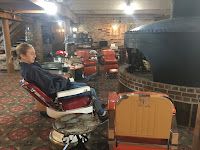 road.  There was an enormous old airplane that an enterprising motel owner had parked on his lawn to attract business, so we stopped and climbed around in it.  Another interesting feature was that the motel lobby had barber chairs instead of normal chairs.

-       Villa Louis, the extremely fancy Victorian-style home of a fur, wheat, railroad, and lumber baron in Prairie du Chien, Wisconsin.  Our tour guide was a very pretty, very nervous, very young woman in Victorian garb clutching a handwritten sheet of spiral notepaper that she furtively consulted.  The only other person on our tour was an older man who said not a word but photographed every room as if he were a crime scene photographer on assignment. 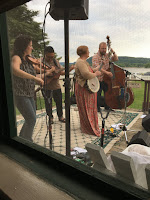 -       The Historic Trempealeau Hotel, in business since 1888 on the banks of the Mississippi. The downstairs is a farm-to-table restaurant and bar with live music, and upstairs are ten original guest rooms with a bathroom at the end of the hall.  It was perfect, because the amenities have been updated and the food and music are great, but it still feels very old-timey. 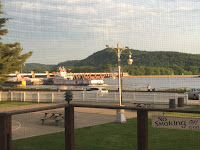 We stayed there two nights and enjoyed watching a lot of freight trains on the riverside tracks and the barges going through Lock and Dam #6 on the river.
-       The Garden of Eatin’ restaurant in Galesville.  The staff were all young women in tie-died shirts with fun hairstyles and piercings, but most of the patrons were old folks from the home down the street.  One elderly patron said to his waitress: “You gonna get any more of them there tattoos?”  The elderly woman seated next to us at the counter was one of 15 farm children who allowed as to how she doesn’t know how exactly how many third-and-fourth generation kids are in her family, but it’s in the hundreds. 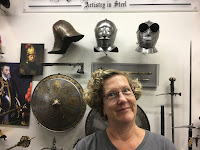 -       The Castlerock Museum of Arms and Armor in Alma, recommended by our pal at the Garden of Eatin’.  The museum was built by and houses the extensive collection of arms and armor of 91-year-old judge Gary Schlosstein.  It is a truly world-class collection.  I asked the docent how the Judge could afford all these amazing pieces, and he said, “Wise investments.”  I got the feeling that Judge Schlosstein is sort of this century’s version of the lumber baron.

-       The Prairie Moon Sculpture Garden in Fountain City, containing the 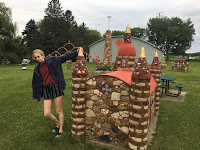 works of self-taught farmer and fiddler Herman Rusch, 1885-1985.  After he retired from farming, he rented out a former country dance hall and filled it with “natural oddities” and began to make sculpture to decorate the grounds.  I love the sculptures, and had it not been for the literal clouds of mosquitoes, I could have stayed for hours. 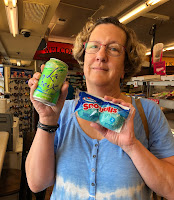 We ended our trip with a couple of days in Minneapolis.  We stayed in the downstairs floor of a beautiful Victorian home.  Our host was an aging hippie who reminded me so strongly of Garth from Wayne’s World that I heard strains of “Foxy Lady” whenever he talked to me.  All food waste was supposed to go in the compost bucket, but I was so embarrassed about my one uneaten Hostess Sno Ball that I took it to the airport to throw it away.

Our last tourist attraction was the Mall of America, which I insisted on seeing because of a book I read, “I Woke Up Dead at the Mall” by Judy Sheehan.  In the universe of the book, the Mall is populated with ghosts of murdered teens who co-exist unseen with midwestern shoppers.  My review: the book was more fun than the Mall.

Posted by Katherine Lang at 5:09 PM