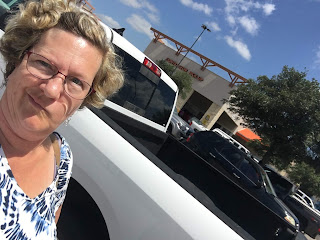 Ellen and I just returned from Austin after cleaning out her student rental on West Campus.  For the past two years, Ellen has lived in the detached mother-in-law cottage behind a big house built in 1916 that was probably once very nice.

The cottage backs onto a creek, and over the past century it has developed its own ecosystem.  There is a colony of flying spiders living in the cracked tiles behind the toilet that I believe has evolved independently and is now an entirely new species.  I discovered them when I mopped behind the toilet, an activity which had likely not been performed for decades.  They were not happy, and neither was I.

Over the years Ellen has complained about the strange noises she heard at night. I was alone in the cottage late one night and I finally understood what she meant.  I would swear there were possums having sex in the walls.

Ellen told me the cottage generated dirt, and initially I did not believe her.  But she was correct.  I would Hoover a room, turn around, and there would already be a new coat of dirt on the floor.

Over the past two years, five people have lived in the cottage.  Ellen had two sub-letters when she was studying abroad, and her housemate also had a sub-letter.  Ellen was the last one to move out.  You never want to be the last one out.

I spent a rainy afternoon locating the e-waste center in South Austin and disposing of all the broken appliances that had been left behind.  We disposed of about fifty bottles of partly used cosmetic products.  Ellen invited some friends over and we gave away many unopened food items that had been bought by aspirational college students who never quite got around to the healthy meals they intended to cook and probably just had tacos at Torchy’s instead.

There were three large furniture items that we had to move along.  Ellen had the Salvation Army truck come, but they told her the economically challenged wouldn’t want them, so we sold them to college students, who aren’t nearly so picky.

But we did have to agree to deliver the furniture: a queen-sized bed, an 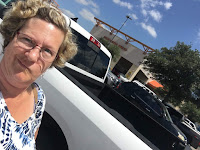 overstuffed armchair, and a hefty sectional sofa. I had to trade in my rental car for a super-cab Dodge Ram pickup truck.  Those of you familiar with my entire lack of spatial relations will appreciate the terrifying prospect of me driving a truck through the tiny streets of West Campus.

Ellen and I somehow hoisted the furniture into the truck and took three 25 mph trips around Austin to deliver it.  There was a moment when the mattress and box spring were hanging off the truck bed, Ellen was in the passenger seat surrounded by sharp metal beams, and we had to cross a railroad track where I thought about everything that might go wrong.  But we persevered and ended up with only very sore backs and mosquito bites.

As we were closing up the cottage, I found a mezuzah on the windowsill and threw it in my purse.  We were running late (of course), and on our way to the airport we still had to drop off some Goodwill donations.  I was afraid that our donations would be rejected, so we paused the truck at the donation station, tossed the bags out, and sped off in our truck.

We made it to the check-in counter ten minutes before the cut-off for baggage, super-sweaty and hauling six duffel bags.  God bless the Alaska Airlines employee who calmed us down and checked the bags. 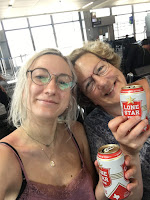 Then only the TSA check remained before we could finally get a turkey sub and relax.  A TSA screener pulled aside my purse and asked if I had anything metal in it.  I thought hard and remembered the mezuzah.  I wanted to keep it, so I channeled everything I had learned from Fiddler on the Roof and explained what it was, how it was used, and how special it was to me and my family.  And she let me keep it!

Now Ellen and I are back in humidity-free California, looking forward to finally watching the Bachelorette Fantasy Suites episode.  Phew!