Visiting Ellen in Brooklyn (and Mom in VA)

Last week I was supposed to accompany Larry to Barcelona for Mobile World Congress on our first empty-nest trip together.  Instead, thanks to coronavirus causing the cancellation of MWC, I only used half my air ticket and ended up visiting my Mom in Northern Virginia and Ellen in Brooklyn.

Over Christmas, while doing laundry in my parents’ basement, I happened upon and whizzed through my Dad’s copy of Dan Brown’s book “The Lost Symbol”.  It is a batshit crazy book but it has very compelling descriptions of all the Masonic memorials and temples in the DC area.

In particular, I was eager to visit the George Washington Masonic National Memorial in Alexandria,  Virginia. Modeled on the ancient Lighthouse of Alexandria in Egypt, it was built by Masons in the 1920s to honor George Washington.  It is on a hill and dominates the Alexandria skyline.  Until I read “The Lost Symbol” I had no idea you could go inside, but it turns out it is a public museum.  At least parts of it are, there are some super-secret areas that are only for Masons. 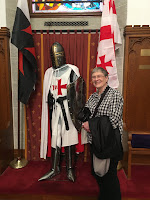 Mom and I visited the Memorial last week and enjoyed our tour with a guide who was not a Mason himself and was thus amenable to a little light ridiculing of Masonic rituals.  From the observation deck on the top we had a clear view of the new MGM casino at National Harbor, and I could feel my mom’s yearning.

My mom is descended from a long line of low-stakes gamblers in Texas.  During summer visits with my grandparents, I spent many evenings in smoke-filled Indian bingo halls watching my relatives play bingo.  My grandma could play eight bingo cards simultaneously.  I usually played one card out of sheer boredom but the gambling gene seems to have given me a miss.

Mom and I drove over to the MGM, parked in the cavernous garage, and wound our way through the enormous casino to the penny slot machines.  We were both completely baffled by all the different themed machines with their chasing lights and sound effects and random buttons. 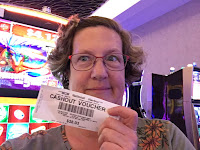 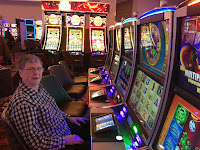 We finally asked a middle-aged couple if we could watch them play and they kindly explained how it all worked.  We agreed to each gamble twenty dollars and no more.  As you may be able tell from these pictures, I came out ahead in the end, and Mom did not.

Ellen is currently sub-letting an apartment in Park Slope in Brooklyn.  I booked an AirBNB down the street from her place and made my way to Brooklyn.  On my first night, we dined in an old pharmacy that is now an Italian restaurant.  Just as in college, two friends materialized for dinner when they heard I was paying.

The next day I ate breakfast at Little Purity Diner and set off to explore Prospect Park. By the time I was deep in the park I was feeling the effects of many cups of diner coffee.  I spotted a “comfort station” but it was closed for the season.  In desperation I consulted Google maps and found that the Prospect Park Children’s Zoo was nearby and open.  I paid my $10 and jetted in to find the restroom.  In a calmer mood, I began to appreciate the Zoo.  It reminded me of all the times I took my kids to Happy Hollow Park and Zoo in San Jose. 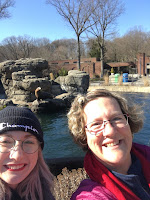 I called Ellen and she took a taxi over.  We strolled around and watched the sea lions and the tiny monkeys.  In the mongoose house there was a bored intern manning an education table.  We sat in the child-sized chairs and asked to play the game he had laid out, cleverly titled “Rodent or Not A Rodent”.

He held up picture cards so that we could see the animals and he could see the key on the back, which apparently just said either “Rodent” or “Not A Rodent”, because he was able to offer no additional information.  It was perhaps the least educational game I have ever played. 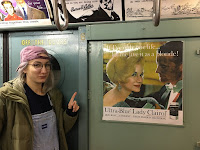 Another day Ellen and I visited the New York Transit Museum, located in a disused subway station in Brooklyn.  It’s a great museum with a lot of old subway cars you can explore and it’s fun to watch all the excited little kids running around.  Trains!!! 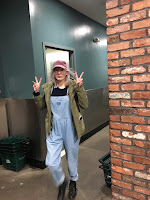 On our walk back to Park Slope we stopped and had dinner in an Italian restaurant.  There was an incredibly boisterous bridal shower taking place in the back, lots of full-figured African-American women in amazing outfits singing really loudly and having a blast.  The Italian waiters all looked a little frightened.  We crossed the Gowanus Canal and stopped in that Whole Foods that was featured in a Broad City episode to use the toilet, where I snapped this cool paparazzi picture of Ellen.

On my last day in Brooklyn I visited Green-Wood Cemetery, a 478-acre cemetery established in 1838 among beautiful wooded hills.  It’s such a cool place.  I couldn’t get Ellen to come with me, and it was a cold and windy Monday, so I had the entire cemetery to myself.

First I spent some time watching the colony of bright-green monk parrots that have been nesting in the gothic entrance gates on 5th Avenue since the 1950s, apparently having escaped from a crate at JFK airport.  Then I picked up the excellent and free(!) map and wandered around for a few hours.

The map has an excellent key that highlights all the best monuments, trees, views, historic points, and famous people in the cemetery.  There are walking paths everywhere, all clearly signposted, so it was like a great scavenger hunt.  I quite enjoyed the lonely brooding mood created by the barren trees and the cold wind, but I would also love to go back in summer when everything is green.

Here are some of my favorite monuments.