Well, That Was Different 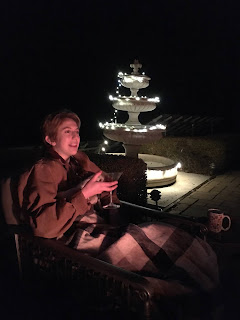 This past Thanksgiving weekend was certainly unlike any others from my past. Frankly, I'm not the biggest fan of Thanksgiving during normal years, with all the coming and going and driving to the airport and trying to accommodate a dozen peoples' must-have holiday dishes. Of course, this year the idea of flying a lot of relatives in and out for a weekend and having a dozen people around an indoor table sounded like sheer madness.

Amy did fly home from the University of Wisconsin, but she’s here until mid-January.  Knowing that once they went home the students were told not to come back until the New Year, she thought some might choose to have a Friendsgiving sort of thing and stick around for a while in their off-campus apartments. However, the pull of a home-cooked meal was apparently too strong, and no one stayed, so here she is, translating Latin over Zoom in the guest room and leaving fat Russian novels all over the place.  I have also been finding large numbers of abandoned tea mugs in unlikely spots around the house.

My friend Colleen has an excellent idea about Thanksgiving that I really wish we could embrace as a nation.  Here it is – now that Columbus Day has been outed as more of a shameful acknowledgement of the white man’s role in killing off native populations than a celebration of “discovering” a fully populated continent, let’s replace it with Thanksgiving.  Genius!  Then we could have a nice break in October instead of a travel holiday so ridiculously close to Christmas.

Susan came down from San Francisco to spend the weekend with us, and I offered up a plate on our patio to any of her friends who didn’t have a local holiday table.  Sydney and Joe took her up on it, and Larry and I were super-excited to spend the day with celebrity guests.

I put off going to the Safeway until the day before Thanksgiving, which I have done every year before this, and I have always had a nice selection of turkeys to choose from. Imagine my surprise when I saw what was left this year:  3 enormous turkeys and a smattering of ducks and geese.  I guess everyone had a small gathering at home, so the normal-sized birds went first.

I brought one of the huge beasts home for Larry to deal with in whatever way he saw fit.  I have never cooked a turkey and I never will.  The only Thanksgiving dishes I care anything about are cornbread stuffing, mashed potatoes, and those green beans with the fried onions.

On Thanksgiving morning Larry realized that the bird would never roast in the oven in time for dinner, so he took it outside and set up an operating theatre where he whacked it into hunks, rubbed it with something, and put it on the grill.  (This isn’t a cooking blog.)  He called his technique “spatchcocking” but I think that’s just because it amuses him to go around saying “spatchcock” over and over.

When Sydney and Joe arrived, we installed them each in a comfy patio chair and gave them each the key item to our outdoor entertaining – an electric lap blanket.  These were Larry’s idea, and they have revolutionized our social lives.  Before The Blankets, as the days began to get dark early and the temperatures dropped, people would drift away by about 6:30.  Now we can sit outside drinking and chatting for hours and hours, probably annoying Tim across the fence.  Sorry, Tim.

Also, my friend Keli offered me her fire table that she felt was a little large for her patio, so now we have atmospheric flames as well.  I also rounded up all the candles I’ve ever received as hostess gifts and set them on a tray outside.  When the wind shifts, one gets a confusing whiff of pine, apple, flowers, and ocean breeze all mixed up together, but I think Martha would approve of the visual effect.

I’ve spent a lot of quarantine reading Martha Stewart articles online, which might come as a surprise to anyone I’ve entertained in my home.  My normal esthetic is much more Mexican party store than Connecticut estate, but I like her recipes.

I hope that Sydney and Joe enjoyed their time on our patio, we certainly enjoyed having them here.  On Friday night we had our friends the Suggs over to the patio, which was lovely.  And then Saturday night we had driveway drinks with our neighbors Derek and Camay on our patio before repairing to their patio (which Martha Stewart could use for a book, it’s that nice) for dinner.

All in all, it was a great weekend and I thoroughly enjoyed it.  I feel very blessed to have excellent friends and neighbors and it is nice to have Amy home for a while.

In continuing news, I dug through my stash (if you sew, you know what I mean) and unearthed a trove of Christmas fabrics.  I have no idea what I originally thought I would do with these festive fabrics, but now I’m churning out Christmas-themed masks and inflicting them on friends and relatives. I wore one festooned with cardinals, snowflakes, and holly berries to De Martini’s.  Elva (Alva?) really liked it ….

Posted by Katherine Lang at 2:35 AM