Big Excitement in the Lang Household

For the last six weeks, I have succumbed to Virus Times Ennui and Rolling Waves of Dread and haven't posted anything on my blog.  To be fair, not much has happened.  Until today!  Big excitement in the Lang household - Ellen's video about Red Vine Salsa has gone viral on TikTok and is very near one million views!

Ellen's post film-school dream of performing in basement comedy clubs, in off-off-Broadway productions, and PA-ing for TV shows in New York fell apart last March, right after she moved to Brooklyn.  She spent the early pandemic sheltering with Larry's sister's family in rural New Jersey, where she became an honorary Powell and made some very funny videos.  (Check them out on Instagram at ellen_lang.)

She came back to California for the holidays and has continued to make videos.  In the inexplicable way of these things, one of her videos went viral on TikTok over the course of the last twenty-four hours.  Myself, Larry, and Amy are actually in the video as taste-testers of the Red Vine Salsa.  Amy has been getting a lot of love from the TikTok set for her cool androgynous vibes.  I, on the other hand, am wearing a dubious bucket hat and had just come back from a six-mile walk in our neighborhood.  I look like such a Mom, which, I mean, I am, so whatever.

Ellen is now in the kitchen making a Red Vine Pie, and she has inspired me to finally sit down and do a little blogging.

I Saw Something Nasty in the Altima

When Ellen moved out of Austin last January, I flew to Texas and we drove her Altima back to California, which led to more adventure than we had anticipated (see my blog entry "Rescued by Mormons").  Since Ellen moved to New York last March, the Altima has been parked outside next to our garage.  For the first few months, I was diligent about starting it up and driving it occasionally.  Then, as with most good intentions, I just sort of stopped doing that.

So when Ellen came back here in mid-December, it had been *a while* since the Altima had been moved.  I anticipated that her battery might have gone dead, so I wasn't surprised when the car wouldn't start.  I pulled my Cadillac up next to the Altima, popped my hood, popped the Altima hood - and then screamed and dropped the Altima hood.

There was a big, fresh rat's nest right on top of the battery.  And an actual rat.

I beat a hasty retreat to the house and called our local service station to ask if they could service rat-infested engines.  God Bless them, they could, for a price, which I was more than happy to pay if it meant that I did not have to interact with the rat.

I then called AAA who sent over a tow truck.  The driver declined to knock the rat's nest off the engine, even though I helpfully provided him with a broom.  Instead, he took some videos of the rat for his friends and commenced to tow the car to the gas station, assuring me that the rat would fall out en route.

It did not.  In fact, it took the service station guys THREE DAYS to get the rat out of the engine compartment.  I called every day for an update.  The rat managed to get the treats out of several traps before it was successfully trapped and disposed of.  I guess the rat really liked it in there.

I asked the guys if this was their first experience with a live rat.  It was not.  They have had to expunge live rats, mice, birds, and bunnies from engine compartments.  After thoroughly cleaning everything, they sprayed the engine block with peppermint oil, which rats supposedly hate.

I also stopped by our local hardware store to see if Henry had any rat prevention items.  He did!  He lives down the street from us and has also had a rat make a home in his engine compartment.  He carries a nifty device that attaches to the car battery terminals and flashes an LED light every few seconds.  Apparently rats also hate disco. 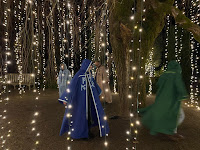 For years I have been a member of Filoli Historic House and Garden up the road in Woodside.  For the Christmas 2020 holiday season, Filoli decorated the gardens with thousands of lights and offered nighttime tours.  My interest was particularly piqued by the "theme nights" - I love a theme.

December 21st was advertised as "Winter Solstice Theme Night" and visitors were encouraged to "come in your solstice attire".  I almost fell out of my chair when I read that.  For the Lang Family Christmas Card in 2018, I had actually sewn us all hooded druidic robes with personalized runes.  As I packed them away after the photo shoot, I thought "When are we ever going to wear these again?"

Solstice in the garden, baby! When we got to Filoli on the evening of December 21st, you will perhaps not be shocked to learn that we were the only people who had donned "solstice attire".  The other visitors had no idea what to make of us.  They couldn't decide if we were staff, or paid entertainers, or just weirdos.

We scared quite a few children, and enjoyed listening to their parents trying to make up reasons why we weren't scary.  It was very fun to swish around in our robes.

After a most enjoyable evening, as we made our way to the exit, one of the staff members called out "Thank You, Druids!" 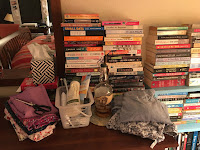 During the Virus Times, Larry has continued to keep a regular schedule, as he is still (Thank God) gainfully employed.  I, on the other hand, have been on no schedule at all, and have been keeping very odd hours.  I began sleeping in Ellen's room when she was in New Jersey so that I could listen to my audiobooks in bed without headphones at any hour of the day or night without disturbing Larry's rest.  Also so that he would not wake me at the ungodly hour of 7 am after I had stayed up until 2 am watching rom coms.

I discovered that I quite liked Ellen's room.  It has great windows and a very comfortable bed.  It was kind of like being in a long term AirBNB.  Over the months I moved a lot of my stuff into that room and the adjoining bathroom.

When Ellen returned in mid-December I realized that I would have to give back her room, but I wasn't prepared to give up my privacy and go back to the master bedroom.  Thus began what Larry dubbed The Great Migration.

I moved my toiletries and books and favorite blankets and pillows and sewing supplies and clothes down to the guest bedroom, which was luckily unoccupied.  It was like moving into another long-term AirBNB.  Susan used that room for her tutoring calls, and Amy used it for art projects, so every day when I got up I would make the bed and hide my things in drawers.  It was like my secret bedroom!

Just this week, after Amy left for Wisconsin, I migrated again, up to her bedroom.  Her windows have a great view of our neighbor's spacious and well-manicured lawns and gardens, so that's nice.  And her mattress is way better than the one in the guest room.  So, future guests, I will be getting you a better mattress, now that I know.