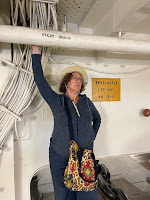 I wouldn't say I had a *glorious* fourth, but it was perfectly acceptable under the circumstances.  (A reference to the Steve Buscemi-narrated video about Biden's presidential candidacy: you can see it here if you are unfamiliar with it.)

We attended four separate events this weekend!  Unmasked!!  They were not exactly wild parties, and none of them involved fireworks, sadly, but as I said, acceptable under the circumstances.

On Friday night Larry and I attended the town of Los Altos First Friday event, which is held, as the name suggests, on the First Friday of every month in the summer.  It consists of a handful of local bands set up on street corners from 6 pm - 8 pm and a few stores staying open until 8 pm instead of 6 pm.

But, hey, we take what we can get out here in the 'burbs.  You can listen to a high school jazz trombonist, or to the old men playing in an all-accordion band in front of Le Boulanger, or watch the old ladies in sparkly hats doing Charleston-esque dances with each other while their husbands stoically wait for it all to be over so they can go back home and watch TV.  (We did all three!)

We also enjoyed a spot of outdoor dining.  We get to keep our parklets in Los Altos at least through the summer, so that's nice.  We ate at Fiesta Vallarta where I got to practice my rudimentary Spanish with our extremely tolerant waitress, and we had those margaritas that come with a tiny beer upended in them.

On Saturday we got together with our neighbors Camay and Derek.  We very much enjoyed our evenings together during the pandemic, and they have graciously agreed to keep up the tradition.  And now we can all sit at the same table!!  And use the same salad tongs!!!  Their son and his girlfriend were here for the weekend, so we had a fresh audience for our interminable and pointless stories.  They were good sports.

In case you haven't heard, Larry was selected as a Santa Clara Valley Water Ambassador from a wide field of candidates (according to him).  There are no actual duties, but he has been educated in water issues, so feel free to contact him if you have an interest in reservoirs.  He donned the regalia I made him for his birthday at our cocktail hour.  He has promised to wear the faucet hat to the next Ambassadorial event.

On the Fourth itself, we drove over to Alameda to visit the USS Hornet, a decommissioned aircraft carrier that is now a museum.  When our girls were little, many of their little boy friends were taken there for Boy Scout sleepovers, and I heard a lot of horror stories from the chaperones, so I've always been curious to see it.  And Larry wanted to see it, because, well, it's a big boat, and boys of all ages love big boats.

The USS Hornet is pretty cool.  Larry was a good sport about taking some Marc Jacobs-inspired fashion photos for me. 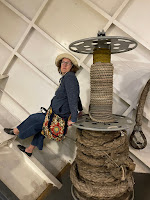 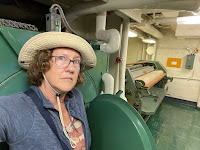 When the USS Hornet was in service, there were 3000 people aboard.  It's a pretty big boat, but it's not that big, and it boggles the mind to think of that many people crammed onto it.  There are hanging bunks literally everywhere on board, and corridor after corridor after corridor below deck.  Up on top you can hang around on the flight deck and look at the views of San Francisco. 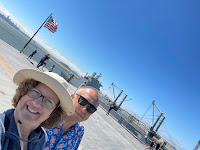 I volunteered to take a photo of a man and woman trying to get a selfie on deck, but I kicked over the man's drink in the process, so I thought it best not to ask him to take a photo of us, which is why my photo is, in fact, a selfie.
When we got home we watched A Capitol Fourth on PBS, that corny country music and fireworks show they do on the Capitol lawn every year, since most of the fireworks shows around here were cancelled due to the pandemic.  Then we watched The Tomorrow War, because it felt like many Americans were at home watching The Tomorrow War, and we wanted to be a part of that.  It was real dumb, but the aliens blowed up real good.
Okay, so we're up to three outings.  Our fourth and final outing was on Monday to our neighborhood block party, where we stood around unmasked and drinking wine with all the neighbors we've been waving at and yelling greetings to for the last 15 months.  It was great to re-connect with everyone.
And then Monday night I got to watch the Bachelorette on my friend's couch.  I think this season is going to be a corker.  But why do they keep letting Katie go on camera in those god-awful frocks?  Where does she even acquire them??  From slutty dolphin trainers??? (That's Jeanette's joke.)

So, yeah, I wouldn't call it glorious, exactly, but it was great to have places to go and people to see over the Fourth.
Posted by Katherine Lang at 1:46 AM